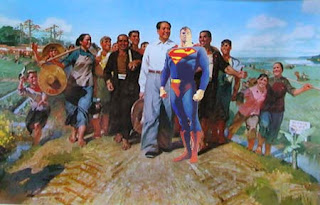 In the event of current global trends, Superman has decided to give up his  US citizenship and become Chinese, and protect the country from evils of Ai weiwei, Ten Biao, Chen Guangcheng, Liu Xiabo and many others threatening democracy, justice and peace in the fine country of China. "He is strong but still few inches shorter than our lovely leader Mao as seen in image released by our state controlled media", exclaims a poor peasant kid.
And while we are on the topic of Supermen, here is a link to enjoy:
http://kimjongillookingatthings.tumblr.com/
at 4:48 am No comments:
Email ThisBlogThis!Share to TwitterShare to FacebookShare to Pinterest
Tags: Rants 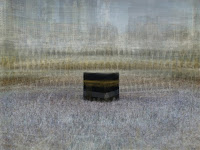 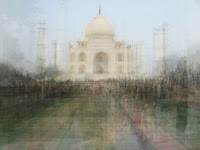 (images sourced from here, which has some more of Corinne Vionnet's works)
Every monument has a postcard and every postcard has its monument that can be viewed and recognised instantly by eyes of friends and family that may never visit it. But through the circulation of these postcards across the globe, not only the monument but even the vantage point from where to record it best have become a part of some sort of a collective memory of the 'networked' population of the human race. 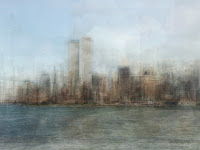 (images sourced from here, which has some more of Corinne Vionnet's works)
Or maybe it isn't the postcards but it is the arrangement of the space that through the axes and imaginary lines that diverge from the subject makes certain angles universally comprehensive to the human eye constrained by its range of colour spectrum, cone of vision or depth of field and appealing to the mind that composes these invisible influences of space within the canvas of the frame. 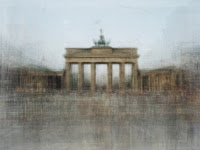 (images sourced from here, which has some more of Corinne Vionnet's works)
We can not really say if it is the postcards or the space that have come to institutionalise the points of best views around monuments, but what we can say is when Switzerland-based artist Corinne Vionnet overlaps 200 to 300 photographs of the same monument taken by tourists across the world the result is a set of exquisitely ephemeral looking images of collective human memory. Some images where the frames record changes, they act like compact time-capsules recording changes as new silhouettes come into focus and older ones fade away.
The nature of images reminded me of Leonardo da Vinci's The Virgin and Child with St Anne and St John the Baptist charcoal sketch from the National Gallery that gets built through tedious layers of strokes that attempt to find the right form in the white space, while the area of focus or rather confidence stays clean, the hand that points skyward; 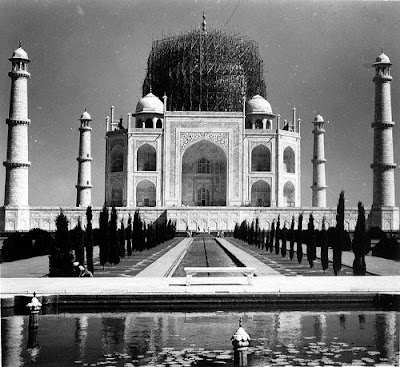 (photo of Taj Mahal with scaffoldings sourcedhere. The site also has photos of many more porcupined fuzzy looking buildings in various stages of existence)
Like humanity formulating these monuments through scaffoldings of collective memories.
at 1:45 am No comments:
Email ThisBlogThis!Share to TwitterShare to FacebookShare to Pinterest
Tags: Art, Globalization, History, Mapping, Photography

During the height of the Cold war and Space Race, on 12th april 1961,fifty years ago, Yuri Gagarin became the first human to journey into outerspace in Vostok 1, he returned back a soviet hero. After 6 years Soyuz 1 carried a cosmonaut who never returned. This cosmonaut was Yuri Gagarin's friend and maybe the only man to be well informed of his inevitable demise even before the launch, Vladmir Komarov. 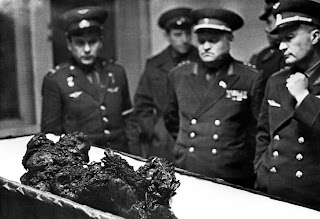 (Vladmir Komarov's remains in an open casket. image sourced from Robert Krulwich's blog that runs the original post on Starman, here.)
I found this very very beautiful story of the Starman here.
Robert Krulwich writes:
"Starman tells the story of a friendship between two cosmonauts, Vladimir Kamarov and Soviet hero Yuri Gagarin, the first human to reach outer space. The two men were close; they socialized, hunted and drank together.
In 1967, both men were assigned to the same Earth-orbiting mission, and both knew the space capsule was not safe to fly. Komarov told friends he knew he would probably die. But he wouldn't back out because he didn't want Gagarin to die. Gagarin would have been his replacement...
...Russayev asked, Why not refuse? According to the authors, Komarov answered: "If I don't make this flight, they'll send the backup pilot instead." That was Yuri Gagarin. Vladimir Komarov couldn't do that to his friend. "That's Yura," the book quotes him saying, "and he'll die instead of me. We've got to take care of him." Komarov then burst into tears."
Though there are lot of questions raised with regards to the validity of its sources by numerous historians, the story of Komarov sacrificing himself for his friend Yuri and the Soviet Motherland is an instant hit, it touches something within us that is a sucker for such heroism. Given an option between a history filled with blind spots and footnotes that turn it into just another event recorded on the time line of human existence and the history that Jamie Doran and Piers Bizony's Starman attempts to write, I will choose the later any day.
And all this is simply because just like Piscine Patel, we all have our Richard Parkers and given a choice we all will pick the story with animals, simply because it is beautiful. Speaking of Cosmonauts and beautiful stories, here is one in the making.
at 12:53 pm No comments:
Email ThisBlogThis!Share to TwitterShare to FacebookShare to Pinterest
Tags: Globalization, History, Space, Universe, Utopias

Sustainability as defined by Multinationals

According to Novelist Edward Docx "In the forest, there are no horizons and so the dawn does not break but is instead born in the trees – a wan and smoky blue."
Here are fragmentary excerpts from an ongoing story of one such forest, The Niyamgiri and its inhabitants who call themselves Jharnia translating as 'protectors of streams' waging a struggle against a UK based multinational and their own government.
A, B, C, D, D2 and some other stories E, F.
...meanwhile in other places strange coincidences make wars for freedom worth the effort.
I have come to believe that these days most contradictions lie blatantly out in the open, it will just take one twig to snap and start a forest fire.