Before sailing into the frigid, interstellar darkness a whimsical looking object carrying with it memories of home, mission to explore the unknown, floating in space, changed orientation as it fixed its electronic gaze on a tiny familiar speck. In the absence of sound its mechanics seemed to glide with balletic ease and precision, cutting through the dark ether, to look back and record a Las Meninas snapshot of a speck of reflected light. This snap came to be known as the Pale Blue Dot taken by a mechanical Astronaftis (literally meaning sailor of the stars) called Voyager 1.
While we are on the topic of scale of this pale blue dot, someone whom I had briefly worked with is on a bicycle trip from London to Kathmandu. Details of the trip and interesting geographies they cycled by have been recorded on their blog. The idea of such a trip is so intimidatingly abstract to me that I may never be able to muster courage to test my levels of patience, stamina and other things that go in such an endeavour, but over time I have come to understand and respect such aspirations. The distance between London to Kathmandu maybe an abstract number, most of us fly over but for Lonkat team it must be a far richer understanding of the scale of this number.
In the light of the past few weeks, when "there are decades where nothing happens; and there are weeks when decades happen", this tiny blue speck seems to resonate with all its elemental spectrum as a group of people cycle across the globe, a tsunami and a earthquake causes destruction, some people protest for freedom and some wage wars.
at 3:23 pm No comments:
Email ThisBlogThis!Share to TwitterShare to FacebookShare to Pinterest
Tags: Space, Universe

I received this in my inbox today sent by a friend. If you are in Bombay and you were a student of Architecture or Arts sometime during the past 20 years, then this is an exhibition you would not want to miss.
Here is the rest of text from the email:
"Kamla Raheja Foundation presents an Exhibition of Prof. Shriniwas Kudalkar's Water Colours and Illustrations.
Shriniwas Ramchandra Kudalkar (b. 1934) is an alumnus of Sir JJ School of Architecture (Batch of 1954). Fondly called Kudalkar Sir, he is a teacher par excellence who has been teaching at KRVIA for the past seventeen years since 1994. He has also taught at Sir JJ School of Architecture since 1964. He is an inspiration for students and colleagues by virtue of his ability to craft each of his Building Technology lectures- beginning with the plans and fleshing out the details thus bringing to life the process of construction.
Not many people know that before commencing his education as an architect, he had already completed a certificate course in fine arts and also apprenticed with a commercial artist.  His students at the JJ school in his early years of teaching have had the good fortune to witness him painting during their study tours.
On behalf of the Kamla Raheja Foundation, It is with immense pleasure that we announce a public exhibition of his paintings in at least three locations beginning at KRVIA- 10th to 17th March 2011 (1pm to 7pm except on Sunday).
An inaugural function of the exhibition reminiscing his earlier years of teaching will be held at the KRVIA on 10th, thursday at 3pm, followed by tea at 4:30pm.
Out of a collection of 174 of the surviving paintings in his possession, we have selected around 50 paintings and a few artworks and illustrations."
I hope I get to see some images from the exhibition.
at 1:41 pm No comments:
Email ThisBlogThis!Share to TwitterShare to FacebookShare to Pinterest
Tags: Architects, Architecture, Art, Bombay, Drawing, India

Johnny Sokko and his Flying Robot 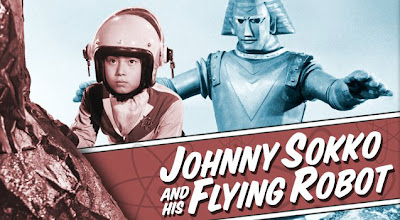 Around the time when I was a a kid and had started admiring the beauty of moving images, my dad with great efforts had put together some savings and bought a coloured TV, a novelty that few homes could enjoy. Being born in 80's in India meant you did not have cable tv, childhood life was co-ordinated around very few definite programs that used to be screened on Doordarshan, one of which was Johnny Sokko and his Flying Robot (created by Mitsuteru Yokoyama).
This was one of those many things that sent its influences across schools, playgrounds and other spaces infested with kids. A bunch of us doing a Giant Robo excercise before a showdown fight for the swing had always perplexed teachers and parents alike. But in the end we would be rest assured that the Robo would struggle through all sorts of acrobatic fights, be badly injured/broken, and still emerge victorious thanks to a combination of fast computing, secret alternative use of already existing weapons (mentioned in the manual, but Sokko and therefore the audience did not know of) and last but not the least sheer brute force.
But then we all grew up and read Kafka's Trial. I have been in one since 2 months now. Got an outcome yesterday, next steps involve further exploration of the labyrinthine corridors of bureaucracy. A Giant Robo would had been very very useful in such matters of the State.
at 4:41 am No comments:
Email ThisBlogThis!Share to TwitterShare to FacebookShare to Pinterest
Tags: London, Rants, Science Fiction

Pots on the Horizon 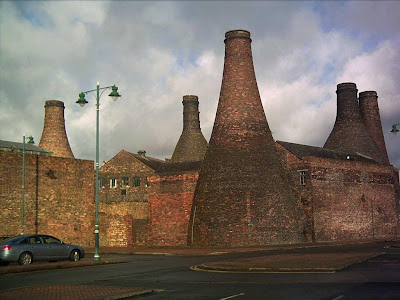 (The Seven Chambers Art Gallery by Cheungvogl)
The act of making a pot involves having almost divine control over the four elements, Earth, Water, Air and Fire. It is the exact combinations of consistencies, proportions and time of these four elements that shall shape the pot which as much being a form from the outside will also be a space from the inside, a memory of a shape that the liquid poured inside will recollect.
Last week I came across two very beautiful buildings. The first one being the Gladstone Pottery (turned into a) Museum with its Bottle Ovens, an 18th century relic of the Industrial Revolution, while the other being a contemporary Art Gallery by design office Cheunvogl. It is interesting to see how the industrial revolution (England) shaped the phenomenology of such a space (for extremely pragmatic reasons) and passed it down the years to be inherited by a very beautiful self reflective private art gallery (China). Like Hands and Gravity that shape a pot, Subjectivity and Objectivity in equal measures seem to have shaped this space on the wheel of Time. 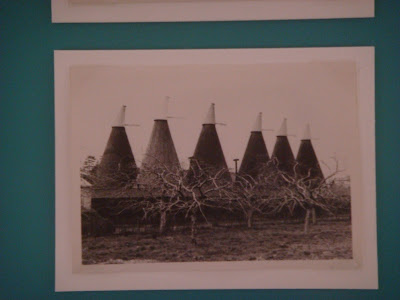