Next to Borivali station, opposite the 240 bus stop there is this 'Bina haircutting salon' where i go. Most of the barbers have been working there ever since i was a kid accompanied by my dad, who would get a haircut just to give me company. I love getting a haircut, it feels like someone just pressed the refresh button or something like that. A lot of things have changed around the salon, with new shops, new products and new hairstyles. But somehow this place stayed unchanged, the white laminate seat for waiting, the shower handles, the designer barber chairs and people working there. The smell of cheap perfume, shaving cream and powder mixing with the spray and everything gets forgiven. These guys are not into styling, they give 3 types of haircut: small, medium and large, working wonders for office goers and people like me who don't like designer French barbers asking which shampoo i use and when, in that peculiarly condescending way thats makes you feel you don't deserve even a single strand of your own hair on your head.
at 10:29 am 5 comments:
Email ThisBlogThis!Share to TwitterShare to FacebookShare to Pinterest 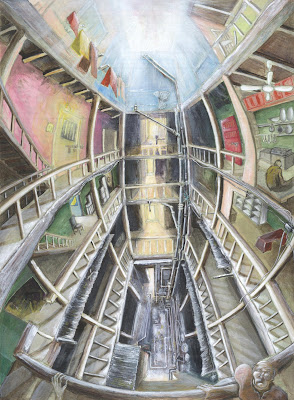 This image as Aditya explained was inspired from a photograph taken to record an internal courtyard. It started with Aditya using the tools of perspective and bending them so as to construct an image that showed more of the courtyard, deforming it more than the photograph so as to enable details of not only the court but also the adjacent corridor spaces that abut it, stretching it a little more so as to represent the narrowness of the court, detailing it intensively to hint at multiple narratives contained within the built form. The pencil sketch used existing tools of drafting and detailing, but when overlaid with a concern to show more, got deformed into a fish eye image.
When Ranjit took over painting of the image, he imagined the image in terms of its light, and attempted to represent the light within the court and thereby represent the narrowness, the stale air, the dimly lit corridors, moisture in the air etc. But interestingly when he painted the image he painted it referring to a photograph and so the rendering of the image got influenced by photographic perception of light and not as seen by the human eye, which explains the over exposure at the top or a little out of focus at the bottom.
The asymmetrical sides, slight tilt of the built form and the clothes (in the extreme top left) hanging straight down are some of the planned errors that add to the overall image.