Danger Wall of Geeta nagar
Once again our survey job has taken us to new frontiers of the city. We went to land’s end from the Navy nagar side, a thin 2m wide bund wall which extends 1.5 to 2 km (a billion decameters for all you know) into the sea bringing you almost to the center of the backbay area with sea on both sides. It was fantabulous. When we asked a local resident for directions he warned us of the dangerous residents of a slum called Geeta nagar who hang around there and advised me not to go there with “lady log” (Namrata). But we decided we should go there and see… 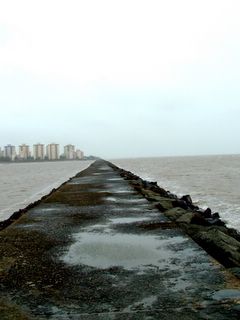 It was amazing, the local residents did give us some looks but beyond that they did not mind. So we got to see the safer NCPA and Queen’s necklace and the rest of the safe city, from dangerous Geeta nagar side. Not only that, one of the dangerous resident who happened to be a taxiwalla decided to give us a lift till colaba.
We asked him the dangers of staying in that locality; he seemed to be most scared of the sea, which rises during monsoon high tides and floods their houses.
at 7:43 am
Email ThisBlogThis!Share to TwitterShare to FacebookShare to Pinterest
Tags: Bombay, City