Having lived in the comforts of familiarity and a constant sense of support derived from family and friends all my life, I was extremely reluctant to leave home and even attempt to inflict myself with so much inconvenience. Pottu had told me before he left, that it takes some time for the “now there is no turning back” feeling to sink in, well in my case it hit me when I was at Mumbai airport about to board the plane, with my head filled with questions, possibilities, reasons, pressure and some funny song stuck in my head. By mid flight I suspected my heart had become heavy enough to demand emergency landing. But then thanks to some air traffic at Heathrow the plane had to loop twice around the city, which fortunately for that day had sunny weather and clear skies, and it was amazing! London glittered in its early morning glory with tiny building, huge institutions, polite roads, old trees, vast open spaces, the London bridge, the London eye, the Gherkin…all my hesitancies and fears were instantly gulped down with single serving instant coffee served by my plastically-fantastic air hostess. The city is beautiful !
Having been here for only two weeks now, I shall restrain from conceptualizing whole of the city through discontent, globalization and consumption discourses, so I may come across as a bit of a tourist ‘on a trip’, which I completely was...
Squares:

I visited the Trafalgar square, with the fountains and huge lions, the scale of the square is massive and is surrounded by monuments. I heard from Neha that ‘Space Syntax’ proposed the two water bodies and the fountains in the square and found ways to get rid of the pigeon infestation! 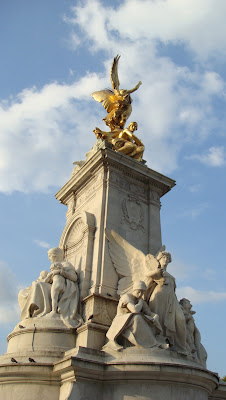 From Trafalgar square, we walked along the Mall with its grand entrance, this is an axis which takes you to the Buckingham Palace with the Victoria memorial with its golden and concrete angels surrounded by a plinth, water body and lots of people. The Mall is a lot like Delhi’s Rajpath. it’s a broad road with open spaces on either side, the St. James park and the Green park.
On one of the evenings I visited Piccadilly Circus which is another important square with glitzy neon and digital billboards that light the place up with lots of people sitting around the fountain. Neha treated me to Sushi here with wassabe and garlic petals soaked in vinegar.
South Bank:

Went to the Thames, from Swiss cottage (where Neha stays) to Westminster, then crossed along the Big Ben, the Houses of the Parliament, then after crossing one is greeted by all the monuments that flank the river with a public walkway that ends somewhere at Bermondsey. 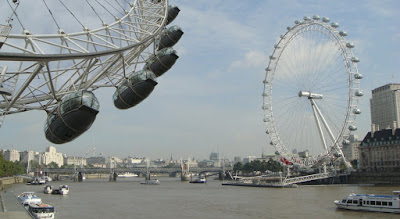 The first thing one notices is the London Eye, that rotates very slowly, actually its so slow that the wheel is not stopped, people just jump in while its in motion. The London Aquarium and an exhibition on Dali is something that I plan to visit, which is just before the London eye. 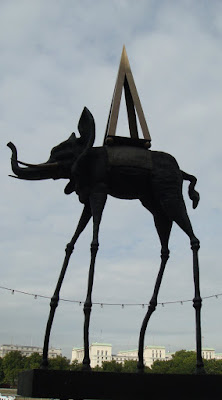 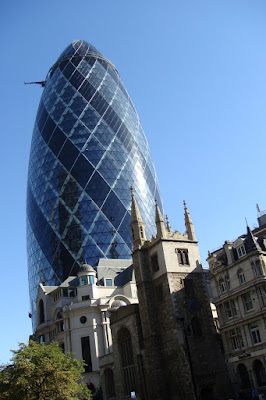 As you walk in the direction of City Hall (Foster’s) you can see Mary Axe also known as the Gherkin and Lloyd’s (Roger’s) on the opposite bank. As I passed the National theatre, the London bridge, the floating naval ship Belfast, I soon lost count of all the things I was seeing…soon I was at the City Hall with the Tower bridge in the background. 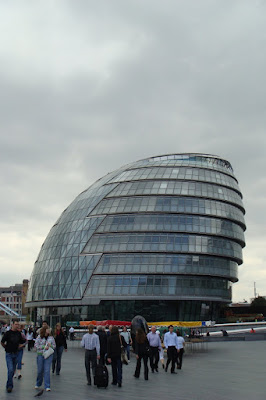 Also came back here after some days with Neha and Sarthi for the South bank festival which was one big carnival and fair with stalls from all over Europe and music and dance.
This place is filled with people who are mostly tourists with maps and cameras and asking for directions, so I was completely at home here.
I again visited this place a third time to see the Design museum which happens almost at the end of the public walkway. It presently is exhibiting Zaha Hadid’s works. Some of her models, paintings and a huge video installation screen, after seeing her work I greatly admire her construction engineers and her clients, who seem to agree to build and finance just about everything from a wave to an entire whale jumping out of the water!
Open House: 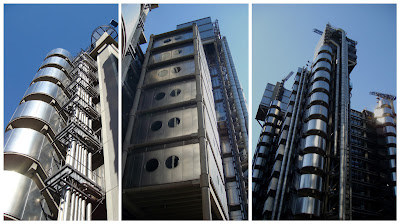 Now this is the best part, the event called open house is an event which takes place in London only once in 2 years, wherein all the institutions, public amenities, offices, residences (even people’s homes) etc of architectural and design importance, that may not be accessible, open up to the public for a period of 2 days! And I was there just in time accompanying people who had waited for 2 and sometimes even more years to visit buildings on their list.

So through the open house I got to enter inside the Lloyd’s bank (Richard Rogers)! Crazy building with amazing details! After that we walked along the Gherkin and landed up at an old conserved Turkish Bath that has been turned into a Pizza place. 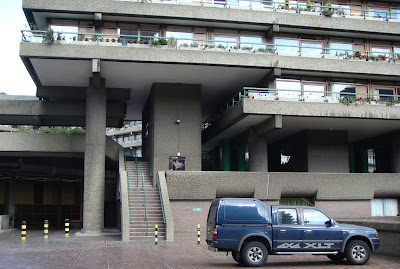 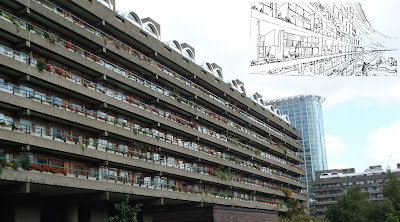 After that we went to the Lombard Jones Mews housing, which is this housing built in the 60’s and 70’s…it’s a mass housing and totally reminded me of Corbusier’s Plan Obus sketch.
After the housing we decided to visit architectural office, so we headed to Camden town and visited Architect David Chipperfield’s office. Nice place, small office, but nice.
The next day visited the 2012 Olympic village (Legacy) site at Stratford. Nothing has come up yet but got to see the plans for the place and the scale of investment that is going to happen. Zaha Hadid will be designing the aquatic sports centre which from what I saw has been inspired from shape of a wave?!?!
this is just my first week, and its been super exciting, its a beautiful and exciting place but it is also very very expensive, people here refer to the first few months as the 'honeymoon phase'...lets hope i manage this tight rope walk well...
at 7:55 am 7 comments:
Email ThisBlogThis!Share to TwitterShare to FacebookShare to Pinterest
Tags: Architecture, City, Galleries-Museums, London

As I prepare to leave I am in the process of packing. Slowly and steadily making lists and prioritizing what I need the most, to be wrapped in smaller pouches and compartmentalized within 2 black bags, that will carry resources, evidences and memories of this place for the next 2 years. My smaller bag looks like a sushi tray, with everyday acts of bathing, shaving, studying and sleeping wrapped in smaller sea weed pouches neatly arranged and ready to serve me when need may arise. My on flight bag reminds me of Star Trek space travelers kit, with cutting edge technology origamied into sleek looking metal cuboids of various shapes & sizes that will talk, analyze & if I don’t achieve social acceptance, then give me company. Most of my baggage is new and smells of air-conditioned shops, sterilized of all touches and ready to be encoded with new sights, smells and sounds. But I also bear with me some old books, photos, clothes and bed covers that will keep me warm on cold rainy London nights.
Having undergone dental ‘rehabilitation’, my teeth hurt a little and don’t feel like they belong to me anymore, just like my luggage, some of them are brand new. As I organize myself to leave behind everything that was ‘me & my’, I stare at my ceiling tonight wondering what the ceiling of my small cozy room in London will be like, will it have wooden slats or will it be painted in cheap fire retarding paint. Tonight I truly understand Murakami’s description of Sputnik and its silent lonely journey, with the earth reflected on its metal body as it swims through dark ether to assemble awareness about itself and the world around…
As I am the last person to depart among all of us who have left for numerous countries and continents, in search of greater goals, better understanding and saucier sex life, I hope that we all get what we wished for and are soon around a party table, somewhere beautiful, talking about each others heroics across the globe. Cheers!

I will miss everyone here, a lot.
Bye Bye people,
Lau
Sau